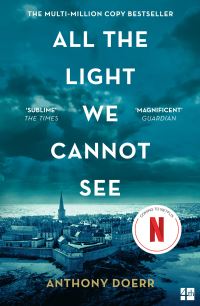 Available: 5
Total number of loans: 6
Loans this year: 0
Number of reservations: 0
Branch availability
Description:
Marie-Laure has been blind since the age of six. Her father builds a perfect miniature of their Paris neighbourhood so she can memorise it by touch and navigate her way home. But when the Nazis invade, they flee with a dangerous secret. Werner is a German orphan, destined to labour in the same mine that claimed his father's life, until he discovers a knack for engineering. His talent wins him a place at a brutal military academy, but his way out of obscurity is built on suffering. At the same time, far away in a walled city by the sea, an old man discovers new worlds without ever setting foot outside his home. But all around him, impending danger closes in.