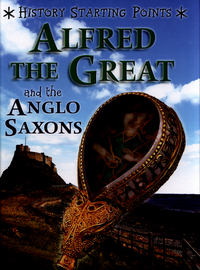 Available: 1
Total number of loans: 1
Loans this year: 0
Number of reservations: 0
Branch availability
Description:
Alfred was the only English king to ever be given the title 'Great'. Why? He successfully defended Britain from wave after wave of Viking invaders, formed the first English army and navy, encouraged English people to talk in their mother tongue and set up the beginnings of a renowned, progressive legal system. Each book in History Starting Points explores the life and times of a key historical figure, from Alfred the Great to Hatshepsut. It tells the story of the subject's life, using vital primary source material, such as what contemporary people wrote about the figure. Alongside this, each book builds up a vivid picture of the historical era in which the person lived, from Anglo-Saxon Britain to the civilisations of ancient Greece and Egypt.
Juvenile.